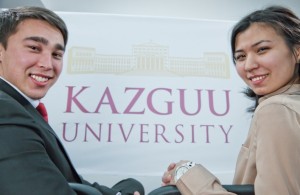 February, 8 2016 – JSC “KAZGUU University” Board of Directors decided to establish Corporate Fund “KAZGUU Endowment”. Endowment is filled mainly by donations. Cash on endowment funds come from large companies, ordinary citizens, including graduates who have made a successful career and return in this way investment in education by previous generations, while supporting future students. Mechanism of Endowment funds functioning has proven to be effective, especially in the US, where it is due to these funds US universities hold leading positions in the world in many areas of science, best scientists, grant gifted students, acquire equipment and finance infrastructure, create new modern schools and departments. Endowment fund is the most transparent and efficient form of financing educational institutions, allowing them to develop financial foundation and build a long-term development strategy. Corporate Fund “KAZGUU Endowment” was created to raise funds in the form of contributions and gifts of University graduates and various companies of the Republic of Kazakhstan, which subsequently will be used to assist in teaching students, material-technical base, implementation of scientific support of students and employees of JSC “KAZGUU University”.