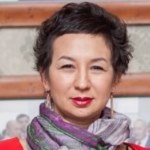 Biography
She was born in 1980 in Kostanai region.
In 1999 she graduated from the Financial and Economic College in Astana, finance specialty, and in 2002 she graduated from the University of Economics in Kostanai, world economy specialty.
From 2011 to 2012 – studying at MBA JSC “KAZGUU University”
2012 JSC “Center for training and development of skills at the Ministry of Finance”. Certified Public Accountant.
2000 – 2002 Senior Specialist of the audit, the non-manufacturing sector of payments. Tax Committee of Kostanai city.
2002 – 2004 Teacher of economical disciplines at the University of economics.
2005 – 2008 consulting company, chief accountant, chief financial officer.
2008 – 2009 the chief accountant of the company’s production and the production of crushed stone.
2009 – 2010 deputy chief accountant of JSC “KAZGUU University”
2010 – 2013 the Head of Accounting Financial Analysis and Budgeting Accountant
Since September 2013 – 2017 Deputy of Chairman of the Board for financial affairs
Manager, KAZGUU College, Aktobe – (2017– till present)
Head of the Audit Company ‘HM Audit’ – (2017– till present)